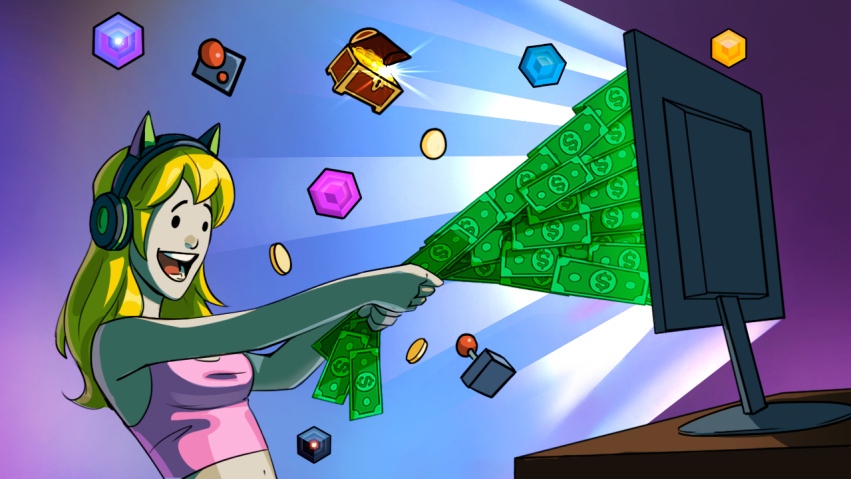 What is Play-and-Earn Gaming?

What is Play-and-Earn Gaming?

But their rise was short lived, and a new style of gaming called Play-and-Earn is taking center stage.

In this article, we break down the difference between Play-to-Earn and Play & Earn…

and we’ll show you how gamers can be rewarded in NFTs and crypto today.

Right now, gamers pour hundreds of hours into their favorite games for free…

With Play & Earn games, you’ll have fun AND be rewarded for all the time you pour in.

All of this is made possible thanks to the ability to monetize and own digital assets on the blockchain!

Some early examples of people earning in games and metaverses online…

In the web3 game, Decentraland, you can host concerts (or any event) in the metaverse…

And sell tickets in exchange for MANA coins (which you can swap for cash).

Or in the Sandbox…

And people can give you SAND coins to play.

On both Decentraland & The Sandbox, you can own, rent & sell limited plots of land using an NFT marketplace.

That means they can’t be cloned or tampered with once minted (created). And that’s what gives them real rarity.

Play-to-Earn was a gaming innovation.

For the first time ever, someone in a developing country could quit their job to play p2e games…

But ironically the gameplay was…

Most Play-to-Earn games were rushed and underdeveloped projects…

and after the crypto bull market ended, these games plummeted in popularity.

Some will even give you the option to play without cryptocurrency involved!

Think of it as an “added feature” to a great game. Not the focus of the game.

This is how blockchain games could penetrate the masses.

Communities will play a huge role in adoption

While games are fun on their own, it’s the communities that bring them to life.

A new generation of streamers & eSports stars will be born…

In-game assets will be player-owned…

Discord communities will have hundreds of thousands of members…

It’s no doubt, communities will play a BIG role in the future.

Now let’s get to the gameplay.

What are the top Play & Earn games right now?

Industry veterans from Epic Games, Rockstar, Riot, Activision, Blizzard and more are behind this game…

The creator of Decentraland, Ari Meilich, assembled this star studded team, so you know it’s going to be good.

Big Time is a AAA rated RPG where you explore futuristic civilizations — battling monsters in fast-action combat with your friends.

You can pick up rare NFT loot and tokens as you fight & defeat enemies.

This game will give your first taste of what it’s like to get rewarded to hang out & have fun with your friends.

It’s another high production game. And made to be a thriving metaverse where players can be space travelers, engineers, scientists, aviators, and more.

Players can join 1 of 3 factions, and build guilds that travel on spaceships to claim & mine planets for resources.

There are two game modes to choose from: PvE (Player vs. Environment) and PvP (Player vs. Player).

ATLAS is the in-game currency used for transactions and in-game missions.

Illuvium is a high production, role-playing game set to release in late 2022 or early 2023.

You are a hunter from a space colony that has crash landed on an alien planet. You adventure exploring to figure out what has happened on this planet.

You mine, fight wild deity-like creatures called Illuvials and catch them with shards (which are kinda like Pokéballs)…

And the game becomes an autobattler when you fight against other teams of Illuvials (like how Pokémon becomes a turn-based game when you battle).

This is where skill and strategy comes in.

Every Illuvial you catch is your property and nobody can take it away from you.

You can sell your Illuvials on the IlluviDEX for Ethereum.

Or level them up and evolve them.

Also, an online ranked arena where you play against different players all over the world.

How to start playing & earning

If there’s a play & earn game you want to play, simply go to the game’s website and see what platforms the game is available on.

You’ll also need to know how to set up a crypto wallet, which you can learn here.

Soon, we’ll live in a world where you get rewarded for playing games & hanging out with your friends.

It’s a future worth working towards.

If you want to stay informed on the best blockchain games and the best strategies to win & earn, then join us inside our Discord.

The future belongs to those who get involved early. Let’s go!