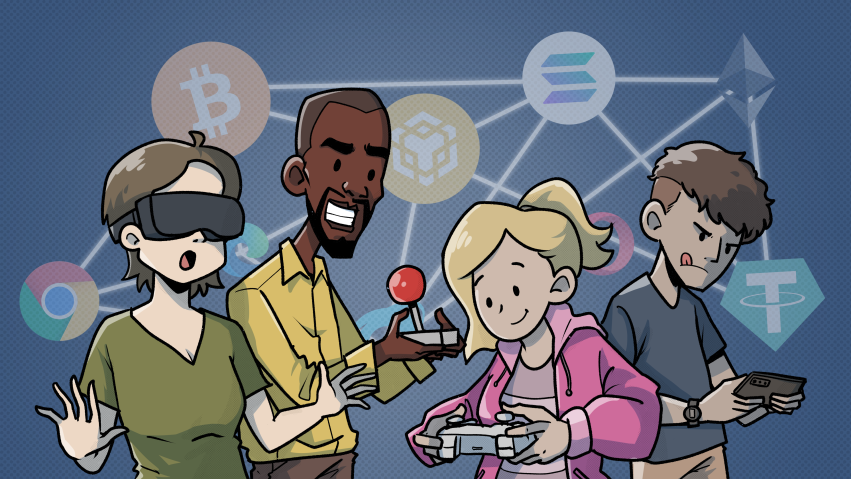 Web3 Games are for Everyone: A Complete Explanation

Web3 Games are for Everyone: A Complete Explanation

Gamers either love them or hate them. But what is a “web3 game”? How does it work? And how do YOU start playing them?

You’ll have all the answers by the end of this article.

What are web3 games?

Web1 was the birth of the internet and the “digital era”.

It’s what gave us search engines, email and websites…

But also the first online games, downloadable games, and CD games for PC…

In web1 we could look, but the infrastructure wasn’t in place yet (for most of us) to create.

Web2 is the social media era… it’s all about interaction and collaboration.

On web2, anyone in the world can have a voice, and build an audience in one centralized place.
This era gave rise to streamers like Pewdiepie…

And so many others.

But there are 3 big flaws with web1 & web2 technology: Ownership, Control & Security.

This goes for video games too.

For example, in Fortnite, according to a 2020 survey, the average player spends over $100 on skins…

But Fortnite still owns those skins.

You can’t resell them…

And if Fortnite wants to, they can censor you, ban you, or take your account away. The studio owns the assets. Not you.

Another example of this is the old PC game – Club Penguin.

In this game, the studio can ban you, take away your digital items, and membership access if you don’t follow their rules.

And once your membership expires… so does your access to all your digital items.

And then there’s the issue of security.

…because the internet was designed to be open by nature (this is why we need antivirus software, firewalls etc.) So that’s where web3 tech comes in…

Web3 tech is still in its infancy, so we won’t see it “break the internet” anytime soon…
But web3 is designed to solve the ownership, control and privacy issues of web2. How? With the decentralized, ledger-based principles of the blockchain.

By now you’re either going ‘Wow’ or, ‘yeah right’…
So let’s dive into HOW all of this is possible…

Smart contracts will lay the foundational rules, execute the agreed upon decisions, and at any point, voting, proposals, and even the code of the game can be publicly audited.

Some web3 games may form as a DAO.

DAO stands for decentralized autonomous organization; a community-controlled organization with no central authority.

Just like Bitcoin has no central authority, neither will many web3 games…

Instead, the community of players may control it.

This is how web3 will give you control.

But what about ownership?

Web3 games use non-fungible tokens (or NFTs) to create digital items that can be authenticated on the blockchain – which makes them tradable, and worth real money.

Now, a lot of gamers don’t want to hear about ‘NFTs’…

So let me show you one example of NFTs done right:

Let’s look at The Sandbox metaverse.

Each plot (LAND) is a purchasable NFT. And when you own LAND, just like real estate, you can build on it, and even build a business on your plot.

In a second, I’ll show you how to play these games for free (or close to free).

How far are we from fully-functional web3 games?

Early blockchain titles focus on play-to-earn, which some complain makes the game feel more like a job…

But the reality is we’re very early to blockchain games.

Many gamers don’t realize HOW early…

But on average, it takes 3 to 7 years to develop a high quality video game.

Okay. Now I know what you may be thinking…

The good news is that fun web3 games (like Big Time & Play Blankos) are already starting to pop up!

How do I play web3 games?

But you’ll need a crypto wallet to own tokens and earn in-game rewards in crypto.

If you want a step-by-step guide on how to set up a crypto wallet, check out this article.

You’ll also want to know how to use hard wallets to protect your tokens from hackers.

How to play web3 games for free (or close to free)

Many web3 games like The Sandbox, Decentraland, and others will require you to buy an NFT to play…

So here’s a few ways to play NFT games for free (or close to it):

Many Twitter accounts and Discord channels in the web3 space do regular giveaways.

Joystick gives away early access passes to the AAA web3 game Big Time; And cash prizes you can re-invest into NFTs.

If you want to participate in these giveaways, follow us on Twitter, and make sure to join our Discord channel.

In this model, you use an investor’s NFTs to play a web3 game (in exchange for 30-50% of the revenue you generate).

The downside of this model is you have to give away up to half of your earnings.

If you want a better solution than revenue sharing…

Joystick lets you use their NFTs and keep 100% of the revenue you generate for a small rental fee.

So those are some ways to play web3 games for free (or close to free).

Will we see competitive web3 games enter the eSports arena?

Axie Infinity is hosting 3 eSports tournaments at AxieCon Barcelona in September ‘22, with a $1m cash pool…

And here’s a quote from FaZe clan’s recent interview with GQ about web3:

“FaZe is bullish on what Web3 will mean for its business. At one point, Trink told me it would be “totally unsurprising” if, 10 years from now, 80-plus percent of FaZe’s revenue was “Web3-derived.”

But as they get better, more immersive, and more fun to watch, you can count on them being a big part of the eSports world.

By now you know what web3 games are, how they work, and how to start playing.

If you’re reading this in 2022, it’s still incredibly early…

And it’s a great time to connect with communities that will pave the way for the future.

If that’s you, don’t wait to join our Discord – where gamers hang out, post hilarious memes, and talk web3 games.