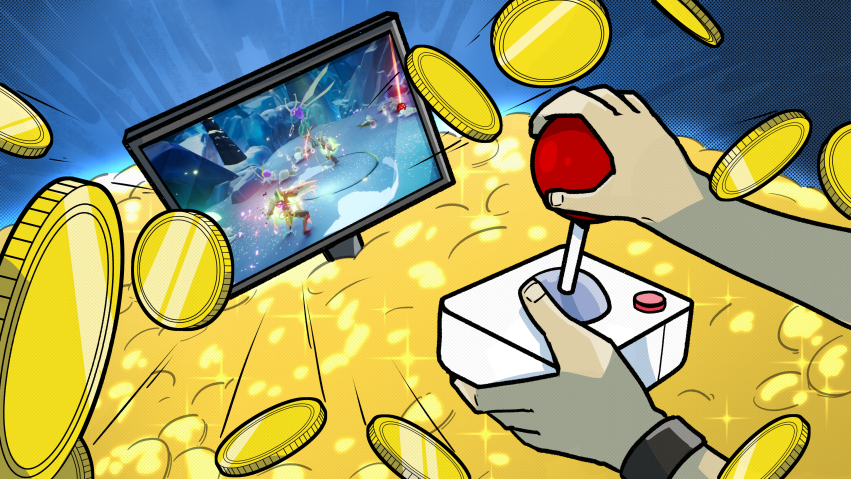 And that you can get paid to play games made by developers from Call Of Duty, Fortnite and Ubisoft…

But suspend your disbelief for just a moment.

Because by the end of this article, I predict you’ll drop everything, and pick up at least one of these Play-to-Earn games.

What are Play-to-Earn Games?

Play-to-Earn games (or blockchain games) are a new kind of video game that reward YOU to play.

These games let you own your in-game items (like characters, skins, and weapons)…

And earn crypto coins for playing.

They do this by turning in-game items into a tradable NFT.

But most of the games on this list are free to play.

Some have even left their jobs!

Because they earn just as much playing these fun games.

And as long as you’re armed with the right education (like how to use a crypto wallet), you can do it too.

You pour hundreds of hours into your favorite games and what do you have to show for it?

With Play-to-Earn games, you WILL have something to show for it.

In these games, you own your skins, characters, and weapons.

Can sell them to other players…

When you level up and acquire skills in these games…

It’s worth something IRL.

Illuvium is a high production, role-playing game set to release in late 2022 or early 2023.

You are a hunter from a space colony that has crash landed on an alien planet. And you explore to figure out what has happened on this planet.

You mine, fight wild deity-like creatures called Illuvials and catch them with shards (which are kinda like Pokéballs)…

And the game becomes an autobattler when you fight against other teams of Illuvials (like how Pokémon becomes a turn-based game when you battle).

This is where skill and strategy comes in.

Every Illuvial you catch is your property and nobody can take it away from you.

You can sell your Illuvials on the IlluviDEX for Ethereum.

Or level them up and evolve them.

And an online ranked arena where you play against different players all over the world.

The developers behind this PC game have contributed to games like Fortnite, Call of Duty and Overwatch…

You team up with players to explore and battle through time and space.

Decorate your avatar and personal time machine with NFTs.

You can pick up rare NFT loot and tokens as you fight and defeat enemies.

Produce NFTs, or just hang out with friends.

However, you can purchase an early access pass on Open Sea, go into Big Time’s NFT marketplace and buy a pass, or watch streamers on Twitch and get free Ruby passes.

It’s another high production game. And made to be a thriving metaverse where players can be space travelers, engineers, scientists, aviators, and more.

Players can join 1 of 3 factions, and build guilds that travel on spaceships to claim & mine planets for resources.

There are two game modes to choose from: PvE (Player vs. Environment) and PvP (Player vs. Player).

ATLAS is the in-game currency used for transactions and in-game missions.

Blankos is a free-to-play, multiplayer game that rewards you for your creativity.

Blankos are minted as NFTs that can be sold via the game’s marketplace.

Guild of Guardians is a mobile, multiplayer, fantasy, action RPG where players build their dream team of ‘Guardians’ and compete in a guild to earn rewards.

In this game you progress through dungeons, and every dungeon has a level that is unique.

There are monsters, bosses, traps… and much more!

And completing these dungeons will earn you resources, currency and equipment.

Gems are the in-game currency, and are worth real money. You can trade them with other players.

You can use gems to acquire/enhance heroes, and create equipment.

This helps you complete the next set of challenges.

So if you like collaborative, multiplayer games, this is a fun free-to-play game.

Splinterlands is a play-to-earn trading card game that gets more exciting as you build your deck.

You’ll receive a limited number of trading cards to start for free.

You can use these cards to battle monsters and experience the game.

If you want to earn rewards, you’ll need a Summoner’s Spellbook (around $10)

If you don’t want to buy cards, you can rent high-level cards from the rental market to work your way up.

As your level goes higher, you unlock card abilities that help you complete quests faster to earn rewards.

Gods Unchained is another free-to-play tactical card game that allows you to own your cards and mint new ones as NFTs.

You can create an account on their website and receive a welcome deck of cards. And use it to get familiar with the game.

You can sell NFT cards in the marketplace, or trade them with other players.

And earn the biggest rewards from in-game events.

The developers designed the game so you can rise the ranks with basic cards without spending too much.

The Sandbox is a free to play virtual reality world that was built by former employees of EA, Sony and Ubisoft.

This is another game that rewards you for your creativity.

There are 166,464 unique plots of land in this metaverse. And land owners can build things like museums, art galleries on their plots…

You can even host live events like private parties or concerts in the Sandbox. And choose to monetize this experience by charging admission fees to visitors.

There’s a creative tool called VoxEdit that allows you to create avatars, vehicles, plans, animals, tools and other objects…

And even a tool called Gamer Maker that lets you develop 3d games without code!

Decentraland is another free to play metaverse that lets you own and build on virtual real estate.

Land owners can build on, or rent out their land for others to use.

Only 90,000 plots of land will ever exist in this metaverse.

You can earn MANA (the native currency) through rent, casinos and even ticket sales for live events like virtual concerts that happen in Decentraland.

You can also create and customize your own avatar…

And hang out with other players.

This is a decentralized platform, so there’s no governing authority that makes the rules.

Instead its community owns the game and builds on it together.

CryptoBlades is an online role-playing and fighting game that lets you level up and create epic gear.

There are four elements: earth, fire, lightning and water…

All characters, weapons and enemies are assigned a part. And the elements increase or decrease the chances of success in battle.

SKILL is the primary token of CryptoBlades.

You earn SKILL from bosses, staking, PVP and raids…

And you use SKILL to recruit characters, forge weapons and make purchases.

You can also trade your characters and weapons on the marketplace.

Thetan Arena is a MOBA style game, like League of Legends or DOTA 2.

You don’t need to pay anything to play this game. But if you buy an NFT, you’ll be rewarded with Thetan coins after a match.

Heroes have different rarities and different skins. The higher rarity ones give you more Thetan coins per battle won.

You have a limited amount of battles per day. And the better the hero, the more battles you’ll have.

It’s possible to earn even if you play for free. You’ll get rewarded when you advance in ranks instead of per win.

Axie Infinity is a play-to-earn battle royale with a turn-based battle system like Pokémon.

You own pets called Axies that you can customize, breed, and battle them against each other for SLP (Smooth Love Potion).

After that you can breed, trade and customize your Axies.

There are 2 modes: Adventure and Arena.

Only the strong will survive in Arena mode (this is PvP)…

Adventure mode is recommended for beginners. You can level up your Axies there through daily quests. And earn a limited amount of SLP per day.

You can also earn Axie Shards (AXS) in Adventure mode.

We’re in an exciting age where gamers finally are rewarded for their time in video games.

The industry is still young, but it’s growing fast, and has a lot of potential.

So now’s a great time to get in early, own, and get paid to game!