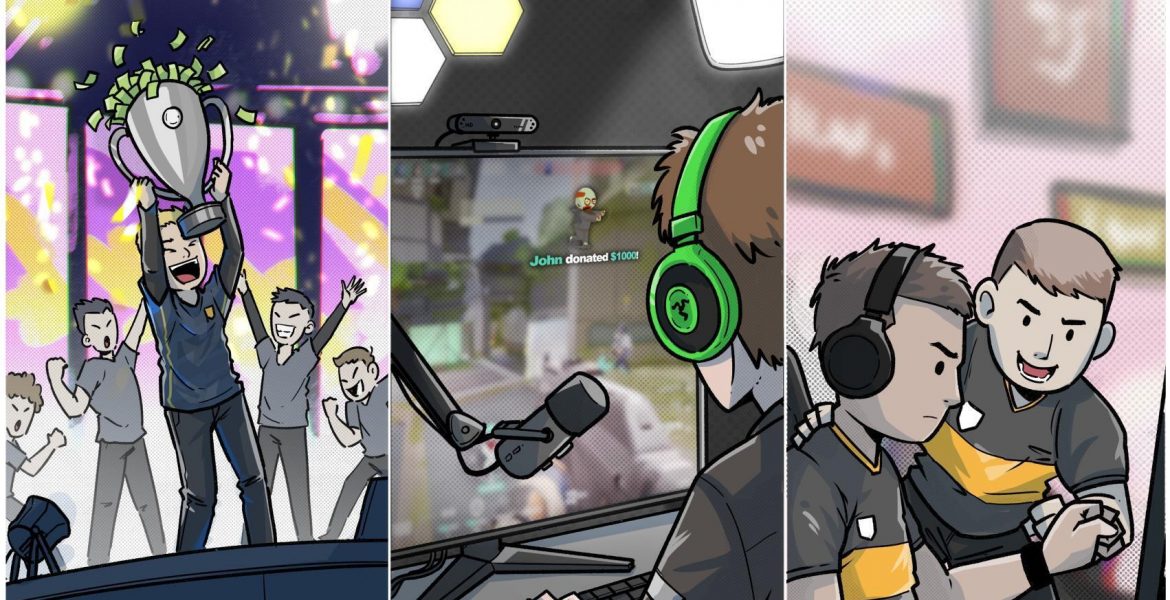 We’ll go over 12 strategies you can use to turn your gaming passion into a side hustle, or even a full-time income.

Let’s get started, shall we?

The first way to make money playing games is through live streams on Twitch.

I’m not exaggerating when I say Twitch can make you rich. Here’s what some of the top earners make:

That’s the power of having a huge audience on Twitch. And there’s many ways streamers get paid.

Just know you’ll have to be committed to grow your audience and community.

But if you love to entertain, be on camera and play video games then Twitch might be the path for you.

Did you know there are games you can earn rewards in that are worth real money?

Many of these games are still in early development, but a few are pretty fun with fast-growing communities.

Here are a couple examples:

Guild Of Guardians, one of the fastest growing mobile metaverse games…

These are new games that reward you in crypto while you play.

Some are free to play (and some aren’t). But to play, you’ll need to connect a crypto wallet to receive rewards.

Here’s our guide on how to set up a crypto wallet.

Almost everyone’s childhood dream now is to get paid to play video games as a YouTube star. But where do you start?

Like Twitch, the bigger your audience, the more you can earn.

Ever scroll on your Facebook feed and come across a gamer’s live stream? (I know I have)

Most people forget that Facebook is also a social media platform for gaming!

To earn through stars and subscriptions, you need to sign up to Facebook’s Level Up program.

Wanna be a professional gamer?

You can join an eSports team (or go solo), and compete in video game tournaments for cash prizes.

Here’s what the top Dota 2 players in the world have earned from cash prizes:

There’s many other games that give out 6 figure cash prizes in tournaments like Fortnite, Super Smash Bros Ultimate, and League Of Legends to name a few… and these prizes are only going to explode in size once blockchain gaming goes mainstream.

You can also get paid through a team salary.

The average eSports pay is $25/hr; But players can earn bonuses by winning league titles, like Will Wierzba.

Will makes $15,300/mo on average from winning online tournaments.

Other ways eSports stars earn is through sponsorships and appearing at conventions.

Since the pandemic, video game coaching has quickly grown to a $1 billion industry!

Solo gamers and esports players will pay coaches to improve their skills.

How much depends on the prestige of the coach.

So, if you’re a pro at a specific game, consider being a gaming coach!

How do you start?

Gaming coaches are freelancers that can anywhere from $30-$60/hr, or more if they’re really good.

AAA Studios and Indie Game developers need someone who isn’t directly involved in making the game to test it for quality insurance.

What do video game testers do?

If you’re looking for work as a game tester, you can go on ZipRecruiter, Flexjobs, or Player Research.

“Speedrunning” means to complete a video game in the shortest time possible. And this genre has exploded in popularity over the last few years…

A perfect example is Dream, a speedrunner whose Youtube Channel gained 10M subscribers in 2020 (it’s now at 29.9M).

They can also compete in tournaments for cash prizes.

Got tech skills? Maybe you should be a game developer.

Game developers earn anywhere from $39 an hour to $75+. And video game companies like Nintendo, Microsoft, Playstation, and Ubisoft all need developers.

Or if you’re entrepreneurial, you can go the independent route.

Like Eric Barone, known for his smash hit Stardew Valley that sold over 10 million copies across platforms in 2020.

You can even develop games within games…

Roblox allows you to develop games on their platform. The game has over 2 million developers. And 325,000 make money that they split 50/50 with the company.

Believe it or not, the top developers in Roblox earn 2-3 million dollars a year!

You can develop games on platforms like The Sandbox or Decentraland.

These companies allow you to keep 100% of your earnings.

To learn more about these Metaverse games, check out our metaverse article here.

Commentators add color to eSports with insightful viewpoints and analysis of the game.

And you don’t even have to be a pro gamer (though that does help).

You just need to know the ins and outs of the game you’re commentating on.

Maybe you don’t want a career in professional gaming…

If you’re just a regular person who loves playing video games, you can create content of all kinds. Two examples are tutorials and full-game playthroughs.

Rad Bad makes between $725 and $11,600 a day according to Social Blade doing full playthroughs of video games on YouTube.

So if you’re a self starter, entertaining, and have a passion for gaming, you can do very well in this niche.

Some people also create eBook guides to sell on Amazon…

Right now there’s a big opportunity to do this for Web 3 games; since a lot of new titles are coming out in the space.

New Metaverse games allow you to turn your gaming hours into real money. And one way is to sell your in-game items.

Here are some examples:

– You can host a concert in Decentraland, and sell tickets (like Justin Bieber did in November of 2021)…

– You can design a skin or structure in The Sandbox, and sell it to other players in their marketplace (see below)…

These are some ways to sell your in-game items in Metaverse games.

A player needs to own an NFT to have the ability to do this in a Metaverse game. But there are ways around buying an NFT…

Joystick’s rental platform lets you rent gaming NFTs, and keep 100% of the revenue you generate from playing these games.

So virtually anyone can get in the game and earn!

Ready to play and earn?

Which was your favorite? Streaming? Esports? Metaverse games?

For more opportunities to play and earn, get involved with Joystick’s community by joining the Discord now.